Famous 85 Inches St. George and the Dragon Statue Replica in Bronze for Outdoor 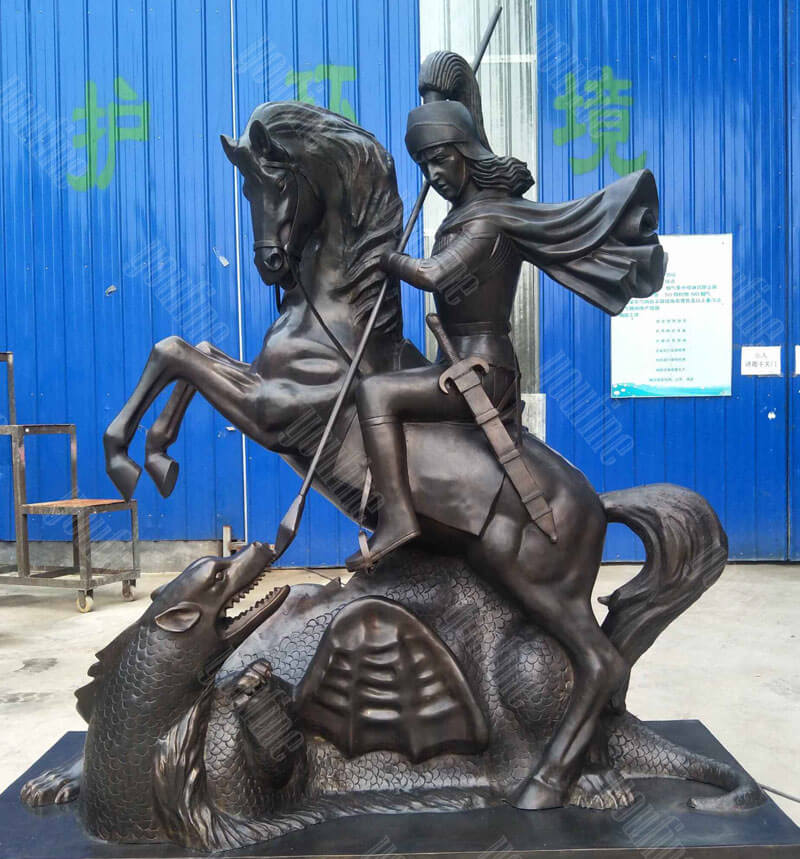 St. George’s and Dragons On his neck was a chain containing a box of sacred relics (including authentic bones from St. George’s)-and a record of devotion.

His helmet was placed on the ground before the character’s organization, and his shield disappeared centuries ago.

The knight could be separated from the horse–perhaps he had carried it in the parade.

The horse is very lifelike-and it is decorated with biblical motives.
The Dragon’s hind legs carry the weight of the horse.
Dragon Support Horse The dragon lay on its back. The following are parts of the body from humans and lambs-and the Descendants of dragons are crawling in the rubble. The dragon is bisexual to both male and female genitalia-symbolizing that evil can reproduce itself. The dragon is in a bowel attack (can you show it in the Church is incredible?)
）。 A dragon’s front leg grabs a broken spear, while the hind leg pushes the horse’s belly.

In this way, the artist has stabilized the statue, because the dragon’s legs bear the weight of the knight’s breeding horse. The princess waited in her bridal veil-and a little lamb.

If the knight loses the battle, she and the lamb will become the next meal of the dragon. The princess and the Lamb were placed in the city of Selena, which was very illogical–because she should wait for the dragon on the beach.

This arrangement is not only illogical, but also non-original, since it is necessary to see part of her veil and the base plate so that she and the lamb can be placed on top of the city. The base is decorated with reliefs depicting the martyrdom of the St. George’s. It is speculated that the original base was much larger and there was a vault with the donor Sten Sture and his wife’s coffin-as well as the St. George’s altar.

The History of St. George and the Dragon Statue

St. George traveled overland and by sea for several months until he came to Libya.

Here he met a poor hermit who told him that everyone on that land was in great pain because the dragon had been ravaging the country for a long time. “Every day,” said the old man, “he demanded the sacrifice of a beautiful maiden, and now all the maidens were killed.” The King’s daughter was left alone, unless we could find a knight who could kill the dragon, or she would be sacrificed tomorrow.

The King of Egypt will marry his daughter to the champion who overcame this horrible monster. When St. George heard the story, he decided to try to save the princess, so he spent the night in the hermit’s hut and departed at dawn to the valley where the dragon lived. As he approached, he saw a group of women led by a pretty girl in pure Arabian silks. Princess Sabra was led by her waiter to the place of death. The knight stimulated his horse and went beyond the ladies. He comforted them with brave words and persuaded the princess to return to the palace. Then he went into the valley.