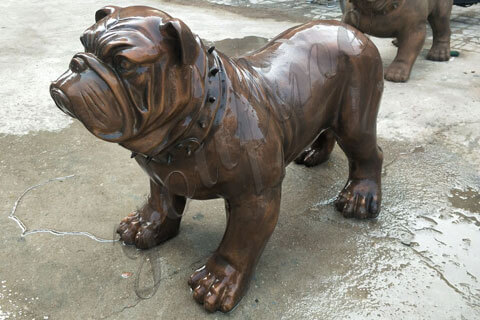 The size of this large bull dog statue  is 90cm（length）*60cm（Height）*50cm(Length), also 3 ft*2 ft*1.7 ft. we have made this bulldog statues for our client Daniel.he like bulldog very much, and he bought three bulldog sculpture for his big hotel. 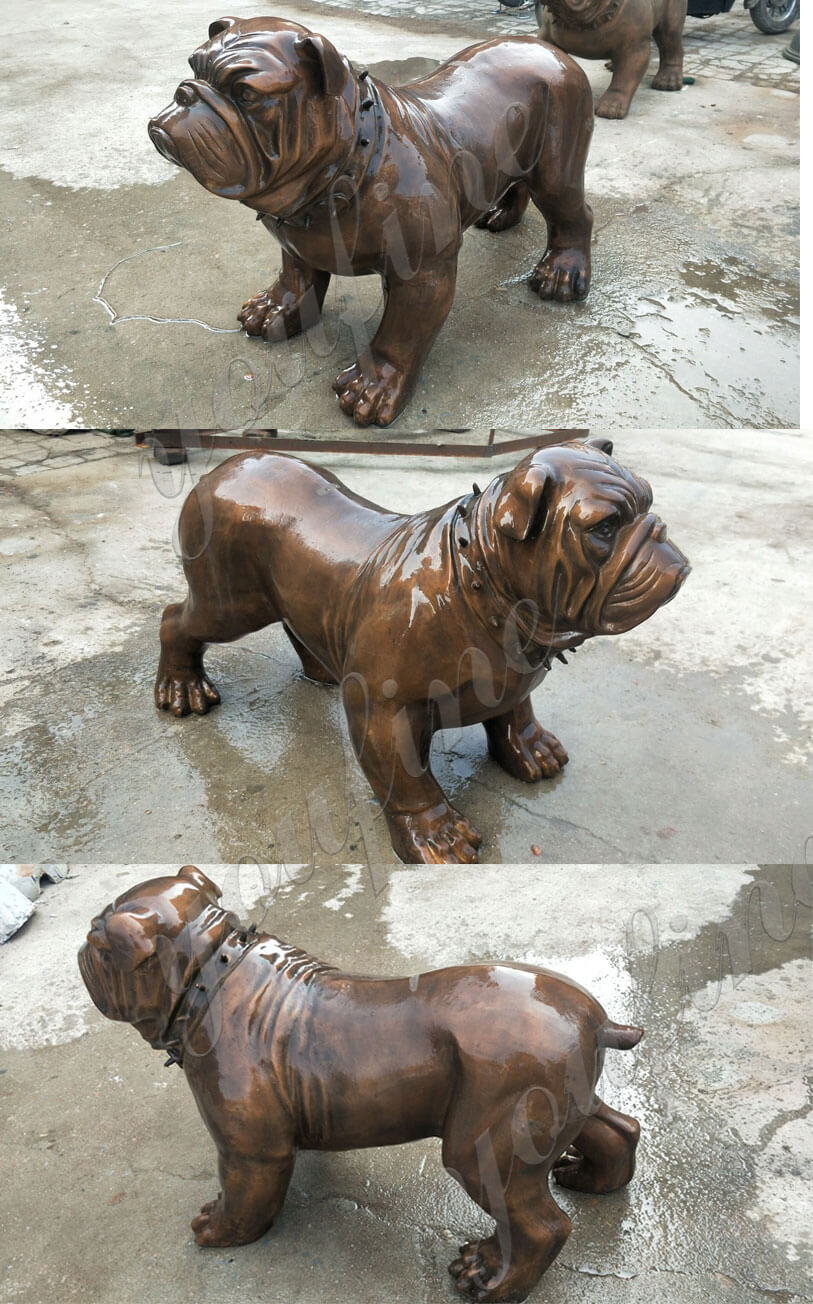 Bulldog is a short, fat breed with a compact body and short, sturdy limbs. The shape of the bulldog leads to a unique gait. Bulldog is famous for its short muzzle and sunken skin on its face, causing obvious frowning, which has become a trademark of bulldog. Bulldogs come in a variety of colors, ideally a short, smooth coat. The only failure of the bulldog in the display ring is the liver-colored nose; however, the black coated bulldog is not the best choice. The typical mature male bulldog is about 55-60 pounds; for a mature female bulldog, about 45-50 pounds.

Bulldog, origin in the UK, ancestors are said to be Mastiff dogs and cattle
Used in the history of bullfighting, it is known for its ferocity and aggressiveness. Later, dog bullfighting was prohibited by law, and the breed developed in the direction of pet dogs. Today, the breed is popular with its ferocious appearance and good-natured character. It is a well-known pet dog breed and can also be used as an excellent guard dog. The adult male dog weighs about 22.7kg, and the adult female dog weighs about 18kg.

English bulldog statues garden shape characteristics
The dog’s head is large and wide, square, with deep wrinkles on the face, small and thin ears, large and wide nostrils, black nose, strong and strong crotch, strong teeth, and super-bite. The neck is short, thick and strong. The torso is thick and strong, the limbs are strong, the tail is short and drooping, and the tip is tapered from the base to the tail, or straight or twisted. The coat is short, thin and close.
Although small in size, it has a strong and powerful shape of a large tamer, which is muscular and disproportionate in body size. The head is big and the head circumference is almost equal to the height. The eyes are lower, the fur is mostly white, and there are many red or light yellow-brown stripes. The face is short, the nose is upturned, and the flat is wide. The back hair is short and smooth.

Bronze Bulldog statue Head Features
Eyes, located in a lower position on the head. The shape of the eyes is quite round, medium in size and very dark in color.
The position of the ear in the head is quite high, and the inner edge of the front of the ear is connected to the outline of the head, at the back corner of the top of the head. The ears are quite small and thin. The shape is the so-called “rose ear”.
The head is very large, wide and square. The head is high and the distance from the nose to the posterior occipital bone is quite short. The forehead is fairly flat and the face is neither prominent nor sagging. The cheeks are round and protrude to the sides, exceeding the range of the eyes. The face, starting from the front of the cheek bone, to the tip of the nose, the distance is very short, the muzzle is very short, wide, and turned up, from the corner of the eye to the corner of the mouth is very deep.
The nose is large, wide, black, with the tip of the nose behind, deep in the middle of the eye. The nostrils are wide, large, black with a clear midline in the middle. The lips are thick, wide, drooping, and very deep, completely overhanging the sides of the lower jaw. In the front combined with the lower lip, it can cover the teeth. The jaw is thick, very wide, square, “squat”, the jaw is quite prominent in the front and turned up.
The teeth are large and strong, with six small teeth in front of the canines, arranged flat and level.